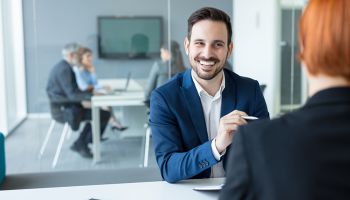 In a long career I can’t say that I’ve always been as “efficient” as I might have been as I’ve gone about my work. As a younger lender, I wasted a lot of time with the office chatter and gossip and even some of the petty politics. Deadlines were made by scrambling and sometime extreme focus that would have been much more efficient if I’d proceeded along a logical and predictable course.

By the time I was the new CEO of the regional bank in New Mexico, I knew that I had to get my house in order if I was ever to get the job done in a satisfactory and successful way.

Here are some of the things I did and I’ll share them with you in the hope that they might be helpful. As a senior officer, there are a myriad things to do—call them responsibilities.

But there are two dimensions of a banker’s job that stuck out to me: getting involved in your community and keeping in touch with your customers and prospects. How do I arrange my time to address these two critical dimensions?

I knew I had to do this, as it is expected of bankers. My bank didn’t do a lot of image advertising, as our owners felt it was not money particularly well spent. I agreed with that and so I was the one who became the primary community pitch-man for the institution.

Exhibit One was my involvement in Rotary. I’ve been a Rotarian for 40 years. In fact, Rotary helped fund my graduate education. I consider myself to have a debt to Rotary, so how I should leverage my Rotary involvement to accomplish both objectives became a practical and urgent question.

First, I volunteered to serve on those committees that produced the weekly meetings. I variously gave the invocation, the Pledge of Allegiance, guest and visiting Rotarian introductions, and those things that got me “up front.”

Second, I served on the speakers’ committee, the group that selected the weekly programs. Generally, the program’s “nominator” was the person who introduced the speaker. That allowed me additional opportunities up front and I introduced over the course of several years both of our United States Senators, the Mayor, and a variety of community notables.

This was the most enjoyable part of my job. Customers love to show off their places of business to their visiting bankers, so I got lots of tours.

I also tried to patronize the businesses of bank customers. This included car dealers, appliance dealers, and vendors of the “big ticket” items. I always made it a point of being sure the owner(s) knew who I was and what I did for a living.

I never missed an opportunity to take out the order pad even if it was occasionally a mock gesture meant to generate a laugh. The point was made and in time, my efforts came back to me in ways that I knew I were heard and appreciated.

Working both harder and smarter

Bankers who are “worth” anything to their employers are hard workers. We work generally long hours and then take time away from families doing after-hours civic volunteer work.

I tried to involve my wife in as much as I could of my work. That minimized the “grousing” at home, as she enjoyed the customer contact and found a couple of important civic engagements in her own right. I was very proud of that and basked in the approbation of those whose appreciated her involvement. That’s an example of a “twofer.” It’s what I consider leverage in a geometric way, rather than just linear.

I chose events as carefully as I could in terms of what I should be doing. I could easily have been out five and six nights of the week with civic stuff and on first arriving in town, I literally was. Soon I grew smarter and solicited the ideas of a couple of highly experienced community stalwarts in the bank and one outside the bank.

“What do I really need to do?” was the urgent question.

Unfailingly, they steered me to the sorts of events where there was the most bang for the buck in terms of who attended and the relative importance of the event in terms of community life and impact.

In training for the job

Before becoming CEO, I’d been credit administrator of a big bank in Oklahoma City. I chaired the credit committee that met every Friday morning. That meant that Thursday afternoons and evenings were spent in preparation. I learned to leave Thursday afternoons free to concentrate on the committee’s reading requirements.

This discipline got translated variously into how I arranged my schedule (with my secretary’s expert guidance) to leave adequate time for preparation and after-action activity of important events and not just the credit committee.

It’s a variant of time management but it’s not always an obvious or a seamless process. It takes effort and awareness—and trial and error too.

I also learned early on as a manager that a great deal is accomplished by dint of personal example.

Creating a relaxed atmosphere at meetings where possible is simply one example of where one can create an environment of fun as well as business.

I generally liked the people I worked with. Where I didn’t, I tried to avoid them or neutralize their behaviors where they were irritating or disruptive. Being CEO was the ultimate tool to accomplish that, but I also tried to appreciate the talents that everyone brought to the table.

It’s just a fact of life that not everyone is particularly enjoyable to spend time with.

I never thought that my job was to be an expert in time management. Instead, I recognized that time was a limited resource and had to be shepherded like any other finite resource.

But the trap I’d seen others fall into is the temptation to let the schedule rule them rather than the other way around.

So much of what we do as lenders is of a personal, relationship nature. It’s important not to miss opportunities to build more solid friendships and attitudes of trust and cooperation. I had to remind myself of that frequently, but I think I was reasonably successful. The rest pretty well took care of itself and I was among the fortunate who could almost every day say, “I love my work.”

More in this category: « How will you fill your next lending job? Loyalty and its link to credit culture »
back to top