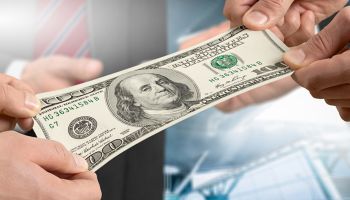 Some U.S. banks are hoping to bolster their bond portfolio yields in the upcoming earnings season.

Banks have steadily increased their exposure to longer-dated bonds in recent quarters and that could boost net interest income, at least in the near term, since those securities usually carry higher yields.

Expanding duration, however, can bring risk if interest rates rise notably. In that scenario, banks likely would hold onto below-market-rate securities for longer periods of time, while funding costs move higher.

The amount of bonds expected to reprice or mature in excess of 15 years increased across bank balance sheets. They rose to 29.26% of securities at the end of the first quarter from 28.82% at year-end 2016 and 26.45% in the year-ago quarter.

Banks have built positions as long-term rates rose considerably in the first quarter, reaching 2.62% in mid-March, just weeks before the quarter came to a close. Those moves could help combat pressure on security yields that likely occurred as long-term rates fell in the second quarter, when the 10-year Treasury yield averaged 2.26%, nearly 20 basis points below the average in the first quarter.

As loan growth was weak in the first quarter, banks put more funds to work in their securities portfolios, which rose to a median of 18.15% of tangible assets from 18.10% in the prior quarter. 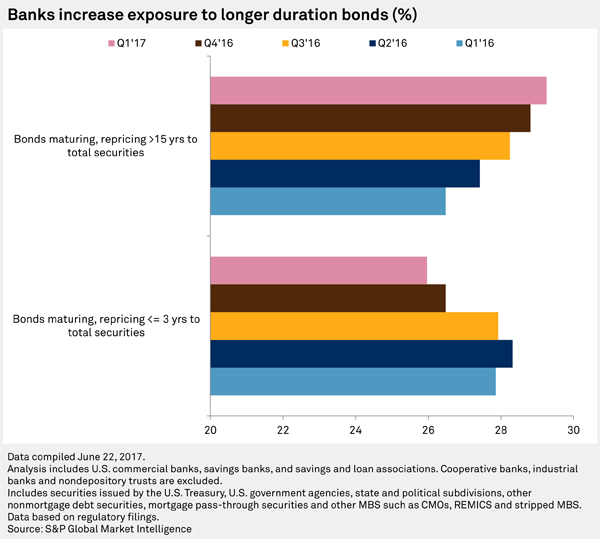 Some institutions say securities were underrepresented on their balance sheets and they took the opportunity to invest cash at higher rates.

Bradley Brown, corporate treasurer at Ally Financial Inc., which reported the third-largest dollar increase in securities in the first quarter, said at an investor conference in mid-June that building positions in the bond portfolio represented a "big opportunity" for the company, particularly if the yield curve steepened. He noted, however, that the company has invested selectively due to the recent volatility in the markets.

"We have been very careful about picking our spots and we've been pretty opportunistic to take advantage of the volatility in the yield curve," Brown said at the event.

He said Ally has invested in some longer duration bonds during sell-offs, but has also taken a step back during some rallies. 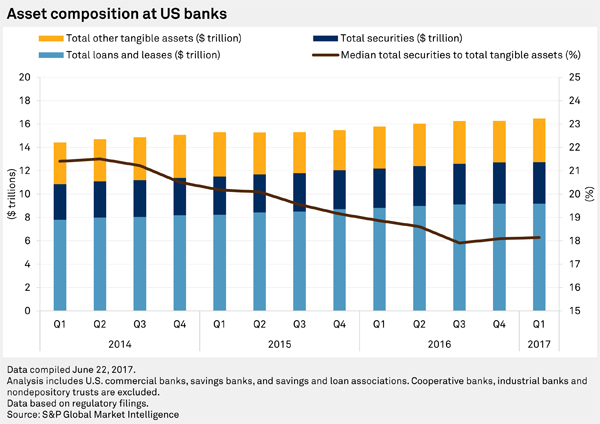 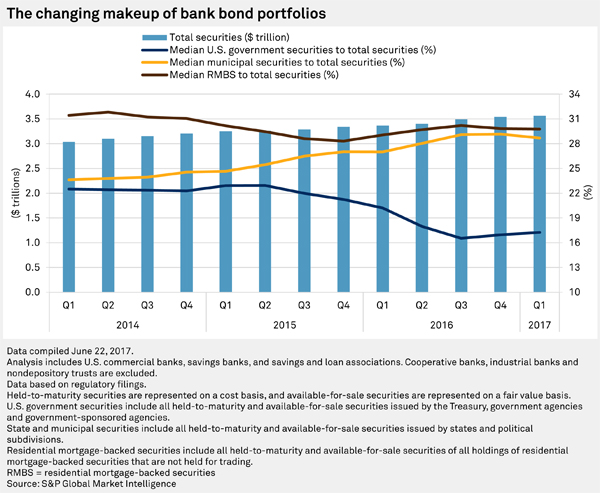 Other bankers have echoed that sentiment and cautioned against meaningfully expanding duration in their securities portfolios. For instance, Terrance Dolan, vice-chairman and CFO at U.S. Bancorp, said at the same investor conference that he is not interested in extending duration too much, particularly with the Federal Reserve planning to shrink its $4.5 trillion balance sheet, which is primarily composed of U.S. Treasurys and mortgage-backed securities.

Most economists expect the Fed to begin winding down its exposure in the fourth quarter of this year but members of the Federal Open Market Committee disagree on when best to take actions, according to the minutes of the Fed’s meeting in mid-June. Several participants believe the Fed should begin decreasing its balance sheet in a few months, while others believe deferring the decision until later in the year would allow for more time to assess the economic environment.

How the Fed's path to policy normalization will impact the bond markets remains unclear. Given the uncertainty, U.S. Bancorp's Dolan believes it does not make much sense to reach too far out the yield curve.

"And I think that presents a little bit of when, how much, what form, and what sort of impact that's going to have in terms of the yield curve," he said of the Fed's plans to shrink its balance sheet. "And so I think doing that, at least right now, doesn't make a lot of sense."

The executive further noted that duration in bank portfolios will naturally extend as interest rates rise.

Rising rates do result in longer effective durations for some securities, including residential mortgage-backed securities, which remain in large portions of banks' investment portfolios. RMBS durations tend to extend as interest rates rise due to slower expected prepayment speeds on the underlying mortgages.

Most banks' exposure to RMBS held fairly steady in the first quarter, with the securities equating to a median of 29.79% of all securities, compared to 29.83% in the prior quarter.

Banks, meanwhile, maintained relatively large concentrations of municipal bonds, many of which are longer-duration assets. Munis represented a median of 28.69% of securities at the end of the first quarter, down slightly from 29.17% in the prior quarter.

This article originally appeared on S&P Global Market Intelligence’s website under the title, "Some US banks stretching for yield in their bond portfolios"