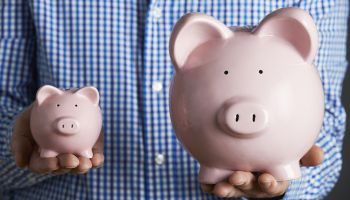 Current economic, regulatory, competitive, and even reputational factors make it more important than ever for financial institutions to implement well-planned compensation strategies that attract, retain, and motivate productive employees.

Recent survey data suggests many institutions have significant opportunities for improvement in this area, particularly in terms of how they establish salary benchmarks, develop appropriate pay ranges, and document their fairness and effectiveness.

One of the effects of the banking crisis, recession, and recovery has been some realignment of pay scales for various positions in financial institutions. Pay scales are affected by many factors, of course, including the relative levels of responsibility associated with a position and, above all, the basic law of supply and demand.

In many cases, pay scales also reflect the industry’s shifting strategic priorities. For example, as banks struggled with a surge in nonperforming loans, the demand for people who could work out problem loans and manage the related financial and capitalization issues increased, and salaries for those positions increased as a result.

To remain competitive in the search for talent, banks must stay abreast of such trends. Accurate and regularly updated salary benchmarks are an essential tool in that effort.

Up-to-date salary benchmarks also can help banks respond to new regulatory requirements related to disclosing executive compensation, particularly the new pay ratio disclosure regulations that will go into effect for many publicly traded institutions for the fiscal year beginning on or after Jan. 1, 2017.

While the various new disclosure regulations do not specifically mandate the use of benchmarks or survey data, such tools are emblematic of the current expectations for greater transparency and careful documentation of an institution’s compensation strategy and practices.

Developing and maintaining up-to-date salary benchmarks can help a bank demonstrate to various stakeholders—including shareholders and its own employees—that it has a well-defined and structured method for monitoring, evaluating, and adjusting compensation levels to be consistent with its strategy.

Recent research indicates many institutions’ compensation strategies may not stand up well to the increasingly close scrutiny that is being applied these days.

For example, every year, Crowe Horwath LLP surveys financial institutions throughout the United States about compensation trends and other issues. Fewer than half of the responding institutions in the 2015 survey reported they had a formal salary administration program in place (as shown by the far left column in Exhibit 1.) 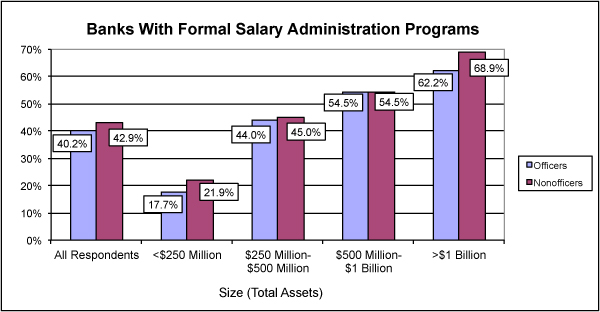 This response suggests that more than half of the institutions in the survey could be vulnerable if shareholders, regulators, or dissatisfied employees were to challenge their salary administration policies as being unfair, subjective, or inconsistent.

Even if no such challenge is mounted, these institutions would appear to be at risk of increased employee turnover due to underpaying employees or perceived unfairness in the way pay is determined.

Conversely, they also could be at risk of incurring unnecessarily high costs due to overpayment.

As the survey responses shown in Exhibit 1 also illustrate, larger banks are more likely to have a formal salary administration program in place.

Regardless of size, however, all banks can benefit from developing or upgrading programs that allow them to establish salary benchmarks and adjust pay ranges accordingly.

The starting point for any salary administration program is a clear definition of the overall compensation strategy. This means identifying how competitive the bank wants to be in attracting employees.

In the annual Crowe Financial Institutions Compensation and Benefits Survey, the percentage of banks offering more competitive base pay levels—that is, base pay levels that are more than 10% above market levels—has been trending generally upward in recent years.

In addition to size, many other factors can affect a bank’s compensation strategy. For example, 39.7% of survey respondents said their institutions make adjustments to employees’ pay to reflect various geographic locations within the organization.

Once a compensation strategy is defined, the first step in implementing that strategy is to identify reliable sources for benchmark data. Salary data reported in a newspaper article might be interesting, but it is not specific or precise enough to be useful in establishing pay ranges for the various positions in a financial institution.

• Compare jobs. Even industry-specific salary data that is broken down only by job titles can be inadequate or even misleading.

For instance, an employee whose job title is listed as “accountant” in one bank could be performing the same duties as a “financial analyst” in another bank. Similarly, some employees who are identified as “mortgage loan officers” might be required to generate new business by networking with builders and real estate agents, while others with the same title are assigned to handling online and telephone applications.

For this reason, survey data used in benchmarking should include not just job titles but also brief descriptions of the employees’ duties.

• Use multiple sources. It is important to use data points from several surveys to establish benchmarks, taking into account such variables as the size of the employers, market size, and geographic region.

The age of the survey data also must be considered. Multiple surveys taken at different times of the year are ideal, with the older data adjusted to reflect recent trends.

• Identify pay ranges. Depending on the bank’s compensation strategy, a simple comparison of average or median salaries generally is not sufficient.

Some surveys report the minimum, maximum, and average salaries for each position; others provide additional interim data points such as various percentile rankings. Banks then can compare these data points to arrive at more precise benchmarks that are appropriate to their defined strategies.

• Define salary bands. It is not unusual for a financial institution to have as many as 100 specific job titles, which makes it impractical to establish individual pay scales and ranges for each title. To simplify things, most banks group similarly paid positions into a single group or band, with a defined pay range for each band.

Some institutions have as few as four broad bands, such as Support, Technical, Professional, and Manager. However, most take a more detailed approach, spelling out as many as a dozen or more groupings and pay ranges.

Once established, pay ranges should be reviewed and updated regularly—at least annually. Larger organizations may merit even more frequent adjustments. Likewise, more frequent review may be necessary for positions that are in high demand.

The Crowe survey indicates the size of annual pay range adjustments has crept upward gradually over the past several years, most likely reflecting continuing gradual improvement in the industry (Exhibit 3).

Pay range adjustments should be based on objective criteria. Most institutions will apply some combination of various pay range adjustment tools such as compa-ratio (employee's current salary divided by the current market rate as defined by the company's competitive pay policy); market index ratio; range penetration; or “red-circle/green-circle” analyses (which are designed to highlight salaries below the minimum level at your bank for a given job or higher than the top end of the bank’s range).

Whatever tools are chosen, they should be applied consistently and documented completely.

Ultimately, base pay ranges are only one aspect of compensation. Performance bonuses and other incentives also can dramatically affect employee productivity and morale.

It’s important to remember that being an “employer of choice”—that is, a leading competitor for talent in a community or region—does not necessarily mean being the highest-paying employer.